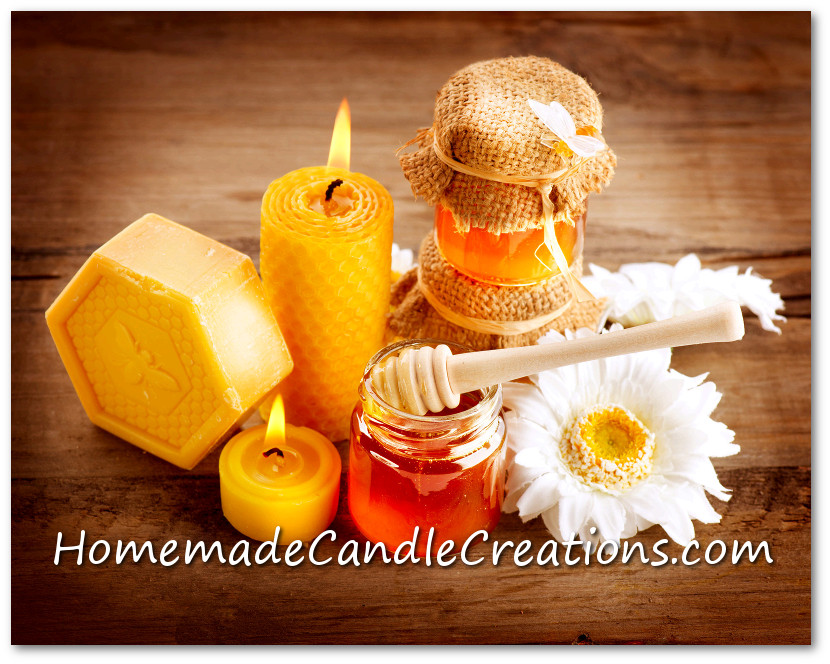 Beeswax is, of course, made by bees. This natural wax is the least processed wax. When beekeepers extract the honey, they cut off the wax caps from each honeycomb cell. There is very little that has to be done to the wax to make it ready for candle making. Once it is gathered, there may be a purification process, but it does not involve chemicals.

“When beekeepers extract the honey, they cut off the wax caps from each honeycomb cell with an uncapping knife or machine. Its color varies from nearly white to brownish, but most often a shade of yellow, depending on purity, the region, and the type of flowers gathered by the bees. Wax from the brood comb of the honey bee hive tends to be darker than wax from the honeycomb. Impurities accumulate more quickly in the brood comb. Due to the impurities, the wax must be rendered before further use. The leftovers are called slumgum.

The wax may be clarified further by heating in water. As with petroleum waxes, it may be softened by dilution with mineral oil or vegetable oil to make it more workable at room temperature.” (Wikipedia)

For candle making, you will find yellow beeswax and white beeswax. Beeswax used for candle making does not have added vegetable or mineral oils as the Wikipedia article stated above (that article is not talking specifically about candle making, just beeswax use in general)

Here’s what Queen Bee Candles says about the influencers of color for beeswax:

1. The length of time the wax is left in the hive
2. Whether the beekeeper melts down old comb and brood comb with their cappings wax (the vast majority of beekeepers do this as it is good beekeeping practice to replace the foundation comb at least once a year in every frame in a hive)
3. What temperature the beekeeper melts the wax at (the higher the temperature the darker the wax)
4. How clean the wax is (in terms of filtering out pollen and dust)

White beeswax has the least amount of impurities and was historically used by royalty. The white beeswax, as you can guess, commanded a high price.

Apparently white beeswax also burns differently than yellow beeswax. I haven’t tested this yet, but I have read that white beeswax burns more cleanly. I’m guessing because it has less of the natural impurities in it.

In short, beeswax is a fine natural wax to work with. It can be used without fragrance and gives off a naturally light sweet scent when burning. It can be used in containers, as votives, tapers, molded pillars and rolled candles.

Beeswax has been used for candles for thousands of years. In fact, there is evidence dating from 3000BC found on the Greek island of Crete, as well as in Egypt.

In the Middle Ages, beeswax was in short supply. Because of this, people mainly used cheaper tallow (animal fat) candles. Sadly, tallow smelled horrible when burning, sputtered and spat, and gave off black smoke. Beeswax, however, burned much more cleanly and had a sweet smell. Beeswax was more expensive because of it’s value and short supply and so was mainly used by the rich.

Today, beeswax candles are still prized for their clean burn and sweet smell.

As I said above, I will continue to add more information about beeswax candles to this page. I am very excited to be ordering some beeswax soon and start making my own! I have been using soy wax only up to this point so it will be fun and exciting to branch out! 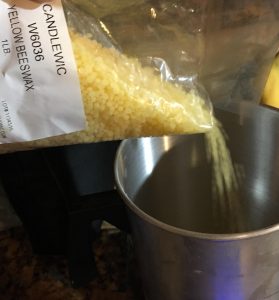 Sorry for the super short video! Some parts didn’t make it because my phone ran out of storage and I couldn’t go back and redo 🙁 I really thought I had deleted enough photos and videos before recording! This was my first beeswax candle making experience. I used an 8oz square mason jar, CD 18 wick, wick sticker to keep the wick stuck to the bottom of the jar, and 8oz of yellow beeswax